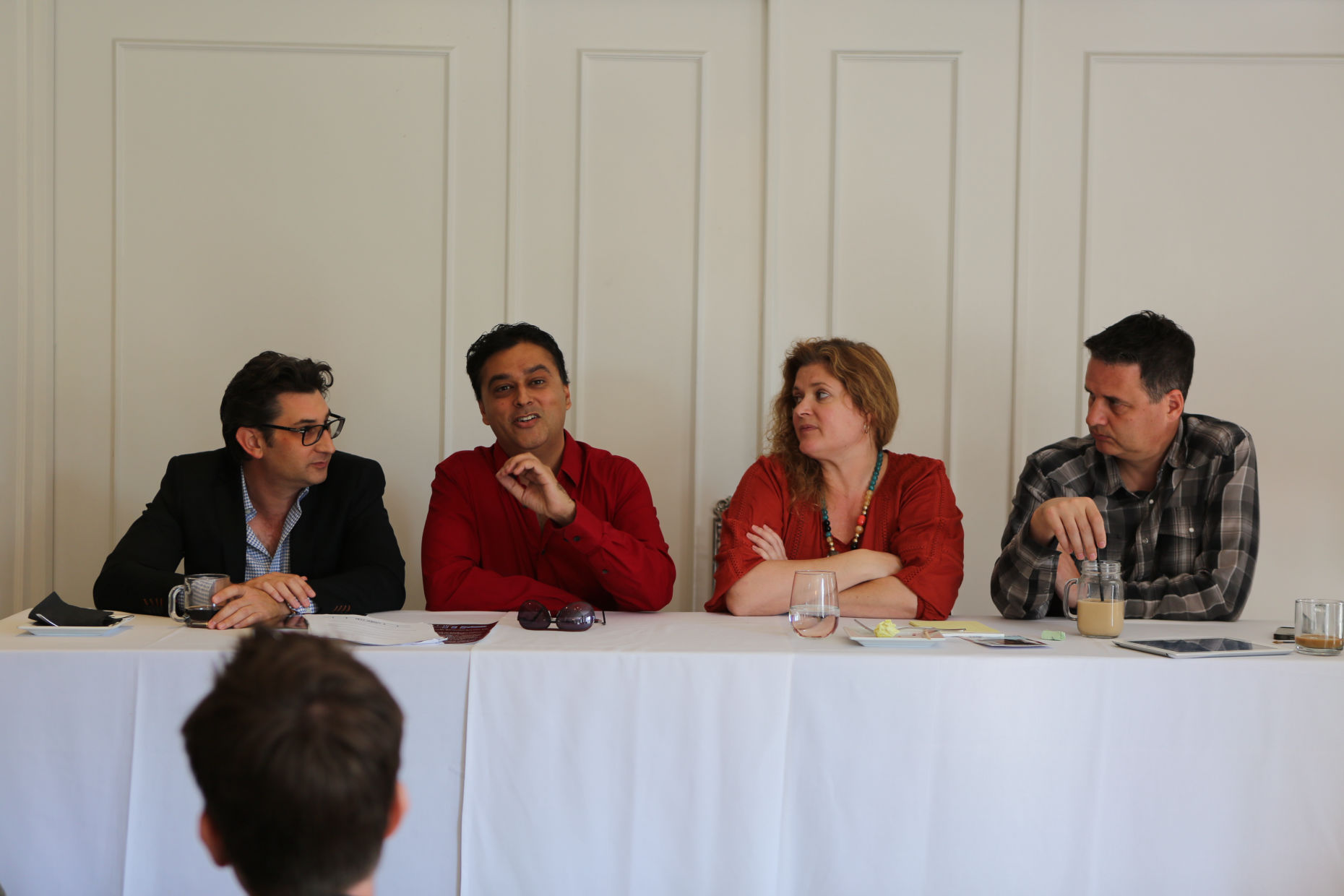 Alex Lehmann: Alex directed and co-wrote the 2019 dramady Paddleton starring Ray Romano and Mark Duplass. The film premiered at the Sundance Film Festival and was released by Netflix. Alex’s narrative feature directorial debut was 2016’s Blue Jay starring Mark Duplass and Sarah Paulson. The film premiered at the Toronto International Film Festival and was released by Netflix. It marked the Duplass Brothers’ first film under their deal with Netflix. Alex is the director of the feature documentary Asperger’s Are Us, and the project’s next iteration will be a documentary series for HBO.

Melanie Miller: Melanie is a filmmaker, festival and distribution expert, and producer of the 2018 Sundance Film Festival’s feature documentary Inventing Tomorrow. The film was a Sundance Grand Jury Prize nominee, and boasts a 100% rating on Rotten Tomatoes. It can be seen on PBS POV and Prime Video, among other outlets. Melanie is currently producing a series for Netflix based on Inventing Tomorrow. Recently, Melanie served as an Executive Vice President at Samuel Goldwyn Films, where she was responsible for the distribution, marketing and PR strategy for PR strategy for all Samuel Goldwyn films.

Dan Lindsay: Dan is the Oscar-winning director of Undefeated, which won the Academy Award for Best Feature Documentary in 2012. Dan and his producing partner TJ Martin directed LA92 a feature documentary about the LA riots, which premiered at the 2017 Tribeca Film Festival. The film was distributed by National Geographic and won a Primetime Emmy for Exceptional Merit in Documentary Filmmaking. LA92 is available on platforms such as Netflix, Prime Video, Google Play, and Vudu.

Kurt Kuenne: His first feature, the teen drama Scrapbook, landed him on Filmmaker magazine's 25 New Faces of Indie Feature Films, and he followed it with Drive-In Movie Memories, a documentary about outdoor movies which opened the Telluride Film Festival and played nationally on PBS. His documentary Dear Zachary was released by Oscilloscope Laboratories and MSNBC Films, and was named one of the Top 5 Documentaries of 2008 by the National Board of Review. Kurt is the editor and co-writer of the 2015 documentary Batkid Begins, which tells the story of a young boy afflicted with leukemia gets to live out his dream of being a superhero. He is also a director on the TV series The Blacklist starring James Spader..

Bill Marsilli: Bill co-wrote the romantic time-travel thriller Deja Vu starring Denzel Washington, which holds the record for the highest-priced spec screenplay of all time after selling to producer Jerry Bruckheimer and Touchstone Pictures for $5 million. Soon after, Bill sold 20,000 Leagues Under the Sea: Captain Nemo to Walt Disney Pictures, and with his Deja Vu partner Terry Rossio sold their space adventure Lightspeed to Bruckheimer/Disney as well. Most recently, Bill adapted the sci-fi comic Sebastian X for producer Gale Anne Hurd and director Martin Campbell, and sold an original project, Cold, to Lionsgate with Reese Witherspoon attached to star and produce.

Terry Rossio: Academy Award-nominated writer Terry Rossio co-wrote (with Ted Elliot) the DreamWorks animated feature Shrek, winner of the first Academy Award for Best Animated Film in 2002. In 1992, the pair co-wrote the highest grossing film of the year, the Disney animated feature Aladdin starring Robin Williams. Their live-action feature film credits include The Mask of Zorro starring Anthony Hopkins and Antonio Banderas. In 1996, Terry and Ted became the first writers signed to an overall writing and producing deal at DreamWorks SKG. In 2003, Terry and Ted co-wrote the feature film Pirates of the Caribbean The Curse of the Black Pearl. The pair then continued with the Pirates franchise, scoring number one worldwide box office hits in 2006 and 2007 with Pirates of the Caribbean: Dead Man's Chest, and Pirates of the Caribbean: At World's End.

Matthew Stein: Matt is Head of Scripted Development and Production at Live Nation Productions. Matt joined the company just prior to the release of Live Nation’s first scripted feature A Star Is Born starring Lady Gaga and Bradley Cooper. He joins after several years at Sony, where he most recently had a film and television production deal and earlier served as a VP at Sony Pictures International Productions. Earlier in his career, he spent 12 years at Dimension Films, rising through the ranks to co-chairman and ultimately EVP of Production, overseeing all phases of production, development and casting for the division. Matt has served as the executive in charge of more than 35 films including franchises like Scream, Spy Kids, and Halloween.

Monika Mikkelsen: Monika is executive director of casting at Paramount Studios where she has cast Top Gun: Maverick, 10 Cloverfield Lane, and various installments of the Mission: Impossible franchise, among others. She started her career working alongside two of Hollywood’s most successful and sought after casting directors, with whom she cast high-profile features, such as Nixon starring Anthony Hopkins and The Rock starring Sean Connery and Nicolas Cage. Monika remains most passionate about independent films, and recently completed casting Learning to Drive starring Ben Kingsley and Patricia Clarkson, The Face of Love starring Annette Bening and Ed Harris, The Disappearance of Eleanor Rigby with Jessica Chastain and William Hurt and What About Love with Sharon Stone and Andy Garcia.

FMF is hosted by Courtney Moorehead Balaker and Ted Balaker, who have  produced for the likes of ABC News, Dimension Films, Drew Carey, PBS, Reason TV, OWN, and Universal Pictures.
The Balakers founded Korchula Productions, a Los Angeles-based film and new  media production company devoted to making important ideas entertaining. Korchula Productions’ projects include include Little Pink House starring Catherine Keener and Jeanne Tripplehorn (“Bottom line—it hits a nerve,” The Hollywood Reporter) and Can We Take a Joke? featuring Gilbert Gottfried and Penn Jillette (“Excellent. Highly recommended” Seth MacFarlane).
The Balakers’ projects have been released to audiences worldwide via theaters, film festivals, through nearly all major digital outlets including Netflix, Amazon, iTunes, and Google Play, via most major cable and satellite providers including Verizon, Comcast, and DirecTV, and on airlines such as Alaska, American, Emirates, Qantas, and Singapore Airlines.
Their projects have been shown on more than 300 high school and university campuses, and have been the subject of special screenings on Capitol Hill, at the Newseum, and dozens of other venues.
The Balakers are immersed in creating content and distributing it, and that allows FMF participants to receive up-to-date guidance from them and their network of industry associates.
APPLY